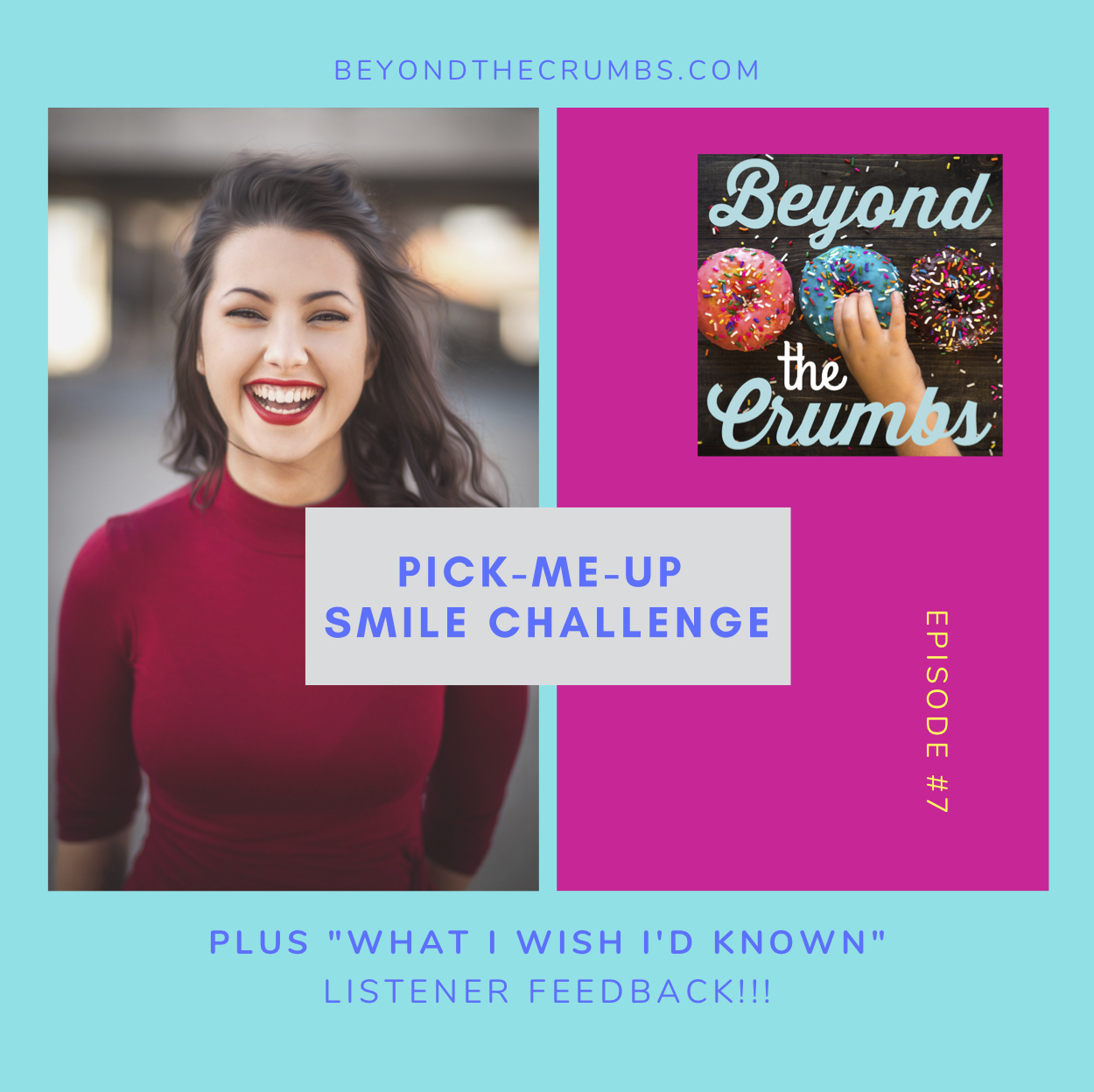 In my first episode I asked the question: What do you wish you could go back and tell yourself as a new parent? What wisdom have you gained since those first days/months/years that you would share with an earlier version of you? I have received some great emails and comments on the show notes so I want to share a couple today.

The first email came from a friend I know personally who is an amazing mom, Amanda Jackson. These points are fantastic, hard-won and so true so I actually numbered them here.

1. Kids will bring out new flaws that I never thought I’d deal with (like a temper) and make me rehash old ones that I thought I had dealt with already (low self-esteem).

2. My family of origin will have a greater impact on how I view & handle parenting situations than I will understand and it will take years of fumbling through those new situations (much longer than I would like to admit) to appreciate my origin’s strengths & weaknesses.

3. Unifying the strengths and weaknesses of my family of origin with my husband’s will be INFINITELY harder than what I anticipate.

4. The years of struggle to be able to give birth to each child will be worth it AND there will be a day you’ll be grateful you don’t have to do it anymore. It is a joy to know your family is complete.

5. Trust my husband more. He is different for a reason. Our kids need both of us.

6. It is good to have ideals but forgive the largeness of the gap between them and reality 😂

7. God has a plan that I will not screw up… that badly…  if I keep praying for guidance and then get back to work.😉

Thanks again, Amanda for the wisdom.

I also received this comment from my friend Cherise Sant:

“If I could tell my 25 year old self anything, it would be… find Brené Brown and read all of her things immediately! Also, I would say, ‘you can do this. Every little and big thing you have to do. Just get started. You can do this. And it’s worth it.’”

If you’ve been listening for a while then you know I’m a Brene Brown fan and I can actually thank Cherise for that since she introduced me to her work years ago!

The year after a new baby is born is always transformative for me and always different from child to child. I feel like I go under construction with each pregnancy and my brain gets stripped down to the studs and over the next year or so I rebuild and come out a new and different person. Some of this you can see on the outside even though most of the work is done below the surface.

After my first baby I began writing professionally. After my fourth I got really into my health and actually lost a hundred pounds which you would never know right now (another story for another day). After baby 5 we Konmari-ed away half of our belongings. And now after baby 6, I have a podcast!

My rebuild happens under the influence of fluctuating hormones, a lack of sleep and amid major life changes and shifting family dynamics. For one such as myself who isn’t great with change this is a lot to deal with. After learning the hard way I’m now proactive about getting in therapy and making my mental health a priority postpartum. But I still struggle. The following segment is brought to you by my postpartum mental health care process:

One of the best parts of being hugely pregnant is it often brings out the best in the people around you. Wherever you go, random strangers give you that wistful smile and head tilt, people offer to lift things, open doors and are often a little extra kind. Not always of course but it’s something that I experience quite a lot more during pregnancy than almost any other time in my life. I think two things are going on there, one: just plain human decency… and also I think it brings up memories or hopes or other feelings for people that have more to do with themselves but end up projected on the pregnant person in front of them. The only thing that trumps this is when you are carrying a newborn. Newborns melt people. It’s science. It’s just how it is. People grin and coo and ooohhh and ahhh and it’s amazing to connect with them as they appreciate and adore this little person you worked so hard to bring here and keep alive. It’s a special time. I know some of you are thinking I’m weird because this kind of thing drives you crazy. I love it though.

BUT it’s a lot for someone with a brain like mine to do all the shopping and errands with little ones in tow so I try to leave whoever I can home whenever possible. This is much easier for me now that I have older kids and a husband who isn’t ALWAYS gone like he was when my oldest kids were little.

Kid free shopping ends up feeling a little more like a vacation than a chore. Although it’s still shopping which I hate so it’s really a working vacation. The only problem with this is that the warm fuzzy cloud I used to float around on as I went about my business is gone. I don’t mind going back to being invisible at all. I actually prefer it but the general vibe is definitely lacking. And I only notice because of the contrast.

I really only even noticed the difference this time when I was settling into a deep, dark, sleep-deprived, postpartum funk a few months ago. On a trip to the grocery store I had one bad experience after another with people which I just really didn’t need at the time.

And then a memory dawned on me: Years ago, I found myself in a similar place. I was grocery shopping days after being released from the hospital. I was nearly 16 weeks pregnant when concerning symptoms led me to discover that my baby’s heart had stopped beating and he had stopped growing. I decided to miscarry at home but that quickly turned into a medical emergency and me in surgery and in need of blood transfusions. It was a traumatic couple of days and then there I was, grocery shopping. I looked around at all the people who just looked like “grocery shoppers” and wondered what was going on in their lives. Were they suffering like I was? Were they in pain? What was going on behind the scenes?

As hard as that time was for me I had a ton of support and many blessings and I got through it okay but that doesn’t mean I didn’t have the darkness tugging on me ALL. THE. TIME. I did.

I remember hearing or reading something during this time along the lines of the fake it til you make it concept and something about how putting a smile on your face can actually change the way you feel and experience things. So I cooked up a little experiment.

I was going to SMILE everywhere I went. At everyone. Any time I remembered. No matter how embarrassing. And not a little modest smile either. A big cheesy, across my whole face, looks like I’m in the middle of laughing at something hilarious and in the middle of an inside joke with everyone in the vicinity. I’d plaster in on as I got out of the car and keep it on until I got back in.

I must have been inspired because the result was just the miracle I needed. There were those faces I’d have seen if my belly had kept growing or if I had a new baby in my arms. At first, a look of confusion flashes across the face in question and then as if by reflex, they smile back. I don’t think they even know why. And I’m not even sure it’s intentional.

If I was sporting a nice polite little smile I don’t think it would even work. It has to be that enormous awkward, socially incongruous, face-splitting grin. Trust me on this. And they don’t just smile, they hold the door, offer to lift something, step out of the way to accommodate your cart, smile instead of glare at your crazy children, let you go first in line when you just have one thing, etc. It’s the best.

So a couple months ago, when I found myself in that funk, this is what came to mind. I was standing in the middle of Winco and decided it couldn’t hurt, so I did my smile. And just like magic, the smiles came right back at me. A little bit of light, a little bit of kindness and a little bit of grace came with them. It doesn’t change the world. It doesn’t change your circumstances, but it does change your environment, your perception of the world, little experiences throughout your day and it connects you with the people around you. And that feeling of being part of a community where you belong and you matter goes a long way. This experiment lights up that part of my brain. Maybe it would do that for you too.

So, give it a try! And tell me about your experience. You can email me at hello@beyondthecrumbs.com or leave a comment here. If you have a friend who might benefit from participating in the challenge, please share this episode with them! 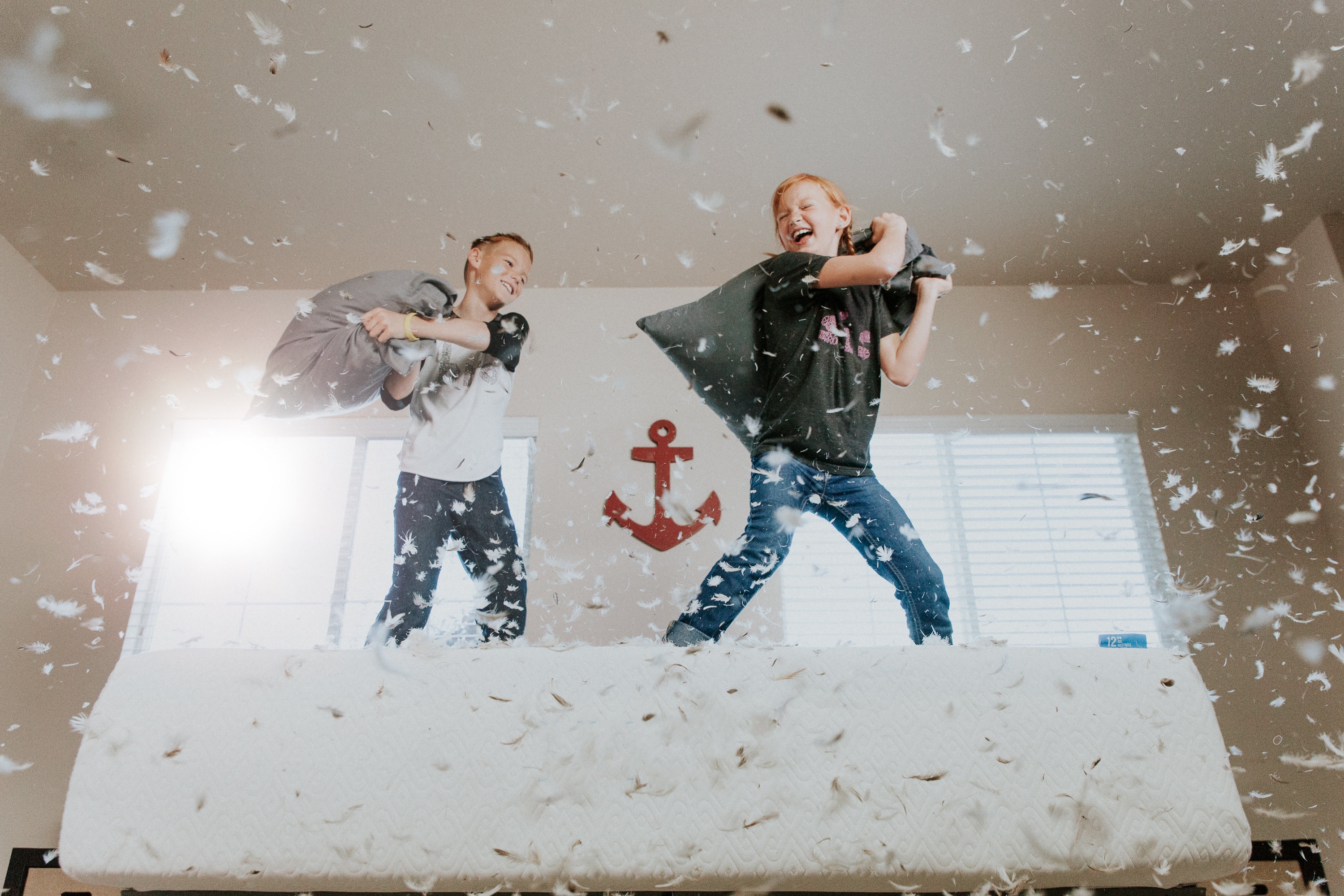 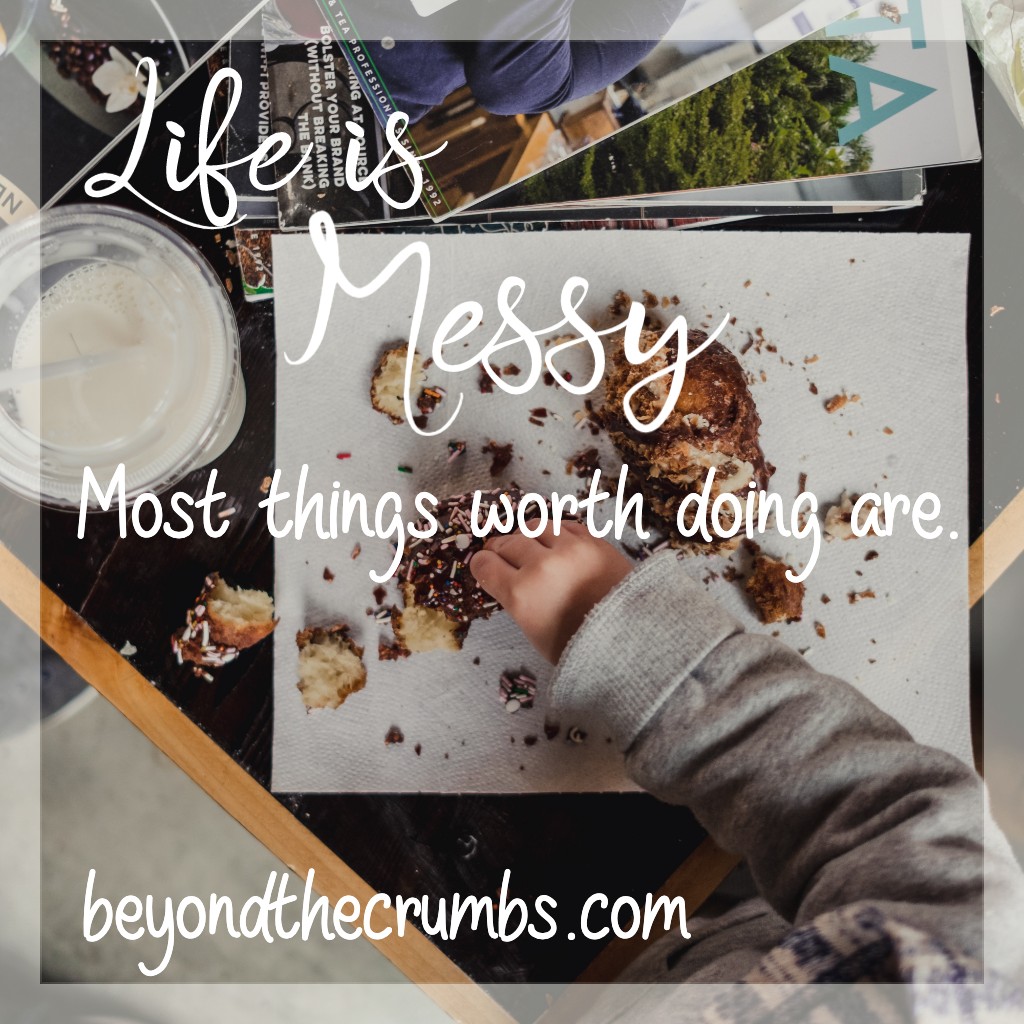 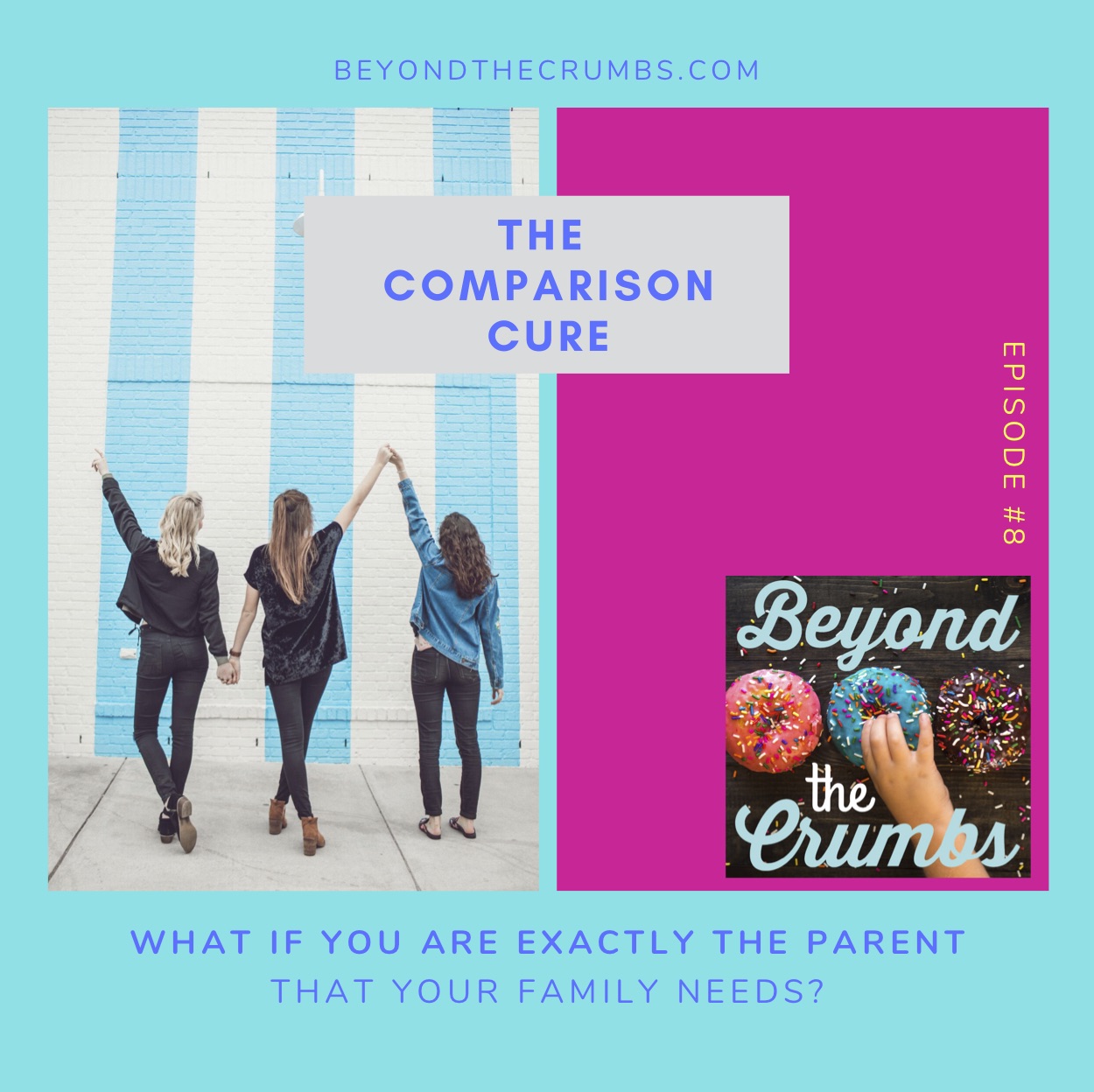